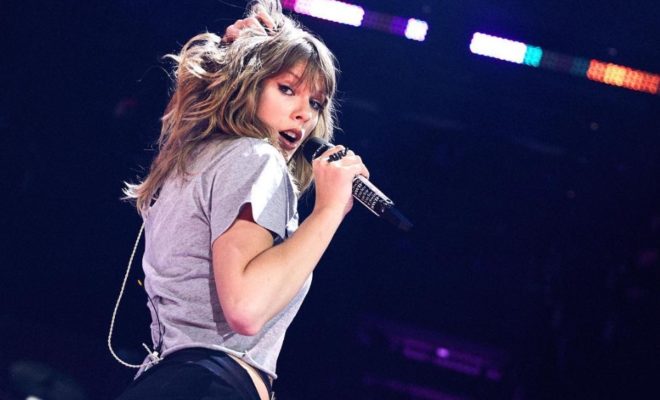 Taylor Swift’s massive Reputation Tour kicked off in Glendale, AZ on May 8th. Swift managed to sell out a 60,000 seat stadium, a first for an artist (even beating out One Direction).  Earlier in the week during her final dress rehearsal she opened it up to 2,000 foster and adoptive families who were treated to the full show, pizza, autograph, and picture with the superstar. Can she get any better? Yes she can, with her mind boggling show and even lurking on fan Tumblrs just minutes before she hit the stage.

WARNING: There are spoilers about her show’s production and set list.  I managed to review the show all from the comfort of my bed in Chicago thanks to social media updates, friends in attendance, photos, and video snippets. Here it goes!

Going to a Taylor Swift show is an adventure everyone has to experience for themselves. From the fan made costumes using lyrics to create characters, to having Club Meredith and Olivia (her cats), to having her own alcoholic lemonade, every little detail made the tour that much more intricate. To put it simply, her stage and production are on another planet. The floors are video screens , the entire stage is video screens used to project absolutely stunning visuals. Swift kicked off the night appropriately with ‘…Ready For It’. As in every other headlining tour, Taylor introduced herself to the crowd and welcomed them to the first night of her tour. Swift also took the time to thank her support acts Charli XCX and Camila Cabello.

“I decided it was really important for me to figure out how I would be & what my life would be like if i didn’t have a spotlight on me all the time. Turned out it was really, really important for me, but I really did miss you guys.” Swift beamed at the crowd. It was great to see that though Swift musically has evolved, the old humble and thoughtful Taylor is still there. Swift performed a mashup of her country hits ‘Love Story’ and ‘You Belong With Me’ to a screaming audience.

‘Look What You Made Me Do’ was a well choreographed festival of lightning and dancing. With this Swift era involving a lot of snakes, it was no question they would be integrated into her show. We didn’t expect to see a cobra as tall as her video screens while she belted out ‘Look What You Made Me Do’. Her outfit and aesthetic for ‘End Game’ made me think she was going into a boxing ring ready to fight anyone who tried and stopped her.

‘Delicate’ featured breathtaking visuals alongside the crowd’s light up LED bracelets dancing to the beat of her single. The best part? She was flying over the audience in a one of a kind light up miniature stage. Thinking there was no possible way she could top herself from this half of the show, Swift brought out her opening acts Charli and Camila to perform ‘Shake It Off’. The trio’s vocals together sounded magical and Swift’s colorful visuals and dress made it all that much more sweeter.

Swift has the ability to rearrange a song and create an acoustic masterpiece. This is exactly what she did for ‘Dancing With Our Hands Tied’, the first song on the acoustic B-Stage which was in the shape of a heart. She went on to perform the fan favorite ‘All To Well’ acoustically to sobbing Swifties in the audience swaying along. Swift did mention that she will be taking fan requests online for different acoustic renditions nightly.

Swift sang and ran through the crowd performing ‘Blank Space’ ending the song at her heart shaped B-stage. Taylor Swift just flew on a snake while singing ‘Bad Blood’ to the main stage. Alright, that was on the list of things I thought I’d never see in life. Swift even made the remark that someone called her a snake on social media and went on to tell a story. ‘Don’t Blame Me’ took everyone to church literally with visuals and figuratively with Swift’s impressive live vocals.

Swift being a multi-instrumentalist, and talented at almost anything she tries her hand at (dancing, songwriting, producing, etc.) brought out her latest custom piano. To the delight and surprise of fans Swift went on to perform the piano version of ‘Long Live’. She went onto perform ‘New Years Day’ on piano finishing off her ballads. I can only imagine what ‘Getaway Car’ looked like to the balcony seats and pit seats with Swift behind an array of different backgrounds and places.

I’ll leave you with the need to go see a show when I say that the closing song was a mashup of ‘We Are Never Getting Back Together’ and ‘This Is Why We Can’t Have Nice Things’. It is now 1 A.M. Central Time and I am going to sleep. Goodnight Swifties!

I Did Something Bad

Love Story/You Belong With Me

Look What You Made Me Do

King of My Heart

Shake It Off (With Camila and Charli)

Dancing With Our Hands Tied (Acoustic at B-Stage)

All To Well (Acoustic)

Call It What You Want

We Are Never Getting Back Together

This Is Why We Can’t Have Nice Things