I’ve lived in Iowa for the majority of my life – minus some mostly unremembered time as a child in Illinois and Indiana, and my three months in London in 2012 – and being an avid concertgoer, I know that it is incredibly rare for many bands or musicians of quality to visit the Hawkeye State. For the most part, the acts that make a tour stop in the state fall into one of three categories: country, hard rock, or oldies. So when I heard word that Nick Jonas, of all people – someone I had driven four plus hours to see before on multiple occasions (once to Minneapolis and two trips to Chicago) – was, going to be playing a show at a small private college in the northeast part of the state, a mere two hours away from where I currently reside, there was no way I was going to miss it. Especially considering the tickets were reasonably priced under $40.

The show was hosted by Luther College in Decorah, a town with a population of less than 10,000 people and not much to brag about other than the “Eagle Cam.” However, a show of this magnitude is not unusual for the college – their list of recent acts includes the likes of Macklemore and Ryan Lewis, Pentatonix, FUN. and Jason Derulo, just to name a few – so having a Jonas perform wasn’t something they were unprepared for. By noon that day, they had set up a barricade outside the Regents Center (Luther’s gymnasium) to direct where attendees could wait in line before the show and the first fans were already huddled up and waiting despite the intense wind and chilly temperatures (the high only reached 46 degrees Fahrenheit).

Fast-forward nine hours later, the temperature was even colder but just as windy, and the line now stretched all the way around the building, anxiously awaiting the opening of the doors (already 15 minutes behind schedule). Fans ranged from parents and their children to high school and college students and recent graduates from across the state (and likely a few other states, Decorah being located close Iowa’s border to both the Minnesota and Wisconsin borders), as well as a fair amount of Luther’s own student population.

By 9:30 the cold and wind were forgotten and I was reminded how intense fangirls can be when the youngest of the Jonas Brothers took to the stage, living up to his new sexy/top-40/R&B image dressed in a leather jacket, black tee and white acid wash jeans, and launched the night off with his current single (and one of my personal favorite from his self-titled album) Chains.

Jonas played the majority of that debut solo album throughout the night, following Chains with Wilderness (a very dance-worthy song), I Want You (during which he specifically avoiding singing the expletives which gained the album it’s Parental Advisory label), and Numb (another club appropriate and dance-worthy song). Closer preceded Jonas breaking out his guitar and performing the smooth, falsetto-filled ballad Santa Barbara, (which Taylor Swift previously tweeted her love for, and which we discovered after the show that Jonas and his backup ladies had to have copies of the lyrics taped to the stage for).

The crowd went wild for the next song, a sick cover of OutKast’s Roses (which he again avoiding swearing during), and collectively danced it out for the following funky jam that is Teacher. I was one surprised Jonas fan when, getting back to his roots he played a snippet of A Little Bit Longer (the Jonas Brothers song he had written about his struggle with Type I Diabetes) on his acoustic guitar leading into a gorgeous rendition of the other ballad he performed from his album, Warning.

He upped the energy again with Take Over, and pretended to be done for about a minute (the crowd didn’t fall for it, since he hadn’t played his most popular song yet). It was a surprise, though, when he came back out for the encore and did a short, stripped-down rendition of SOS, throwing it all the way back to the JoBro’s early Disney days (I might have freaked out a little…ok a lot) before ending the concert with the radio smash that is Jealous. 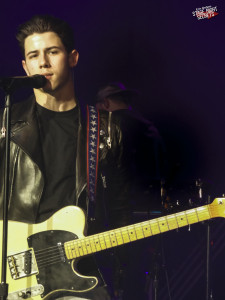 Along with looking amazing and proving his talent as a singer and musician he also show off his humors side, making jokes about 4/20, Decorah’s location, and the crowd’s dance moves. Other notable highlights included borrowing a fan’s phone and filming himself and the audience during the performance, and provoking the Luther students in attendance to show him their chant (which all the students knew and screamed, and made me feel like I was somehow mistakenly in the midst of a small cult.)

It’s been a bit since I had been around such loud and high pitched screaming and such insistent pushing as there was at this show, (no judgment on that, I had my days as a fangirl and screamed loudly and pushed roughly at many a show and for many a band that wasn’t near as big as Nick J) and I can honestly tell you I hadn’t missed that aspect of shows but this was definitely worth suffering through, and I would do it again in a heartbeat. I would highly recommend you all go see him for yourself if you have the option – it’s a far cry from the Jonas Brothers, but Nick himself is still wonderfully talented and funny (and of course attractive) and his new solo music was definitely fun to get to jam out to live.