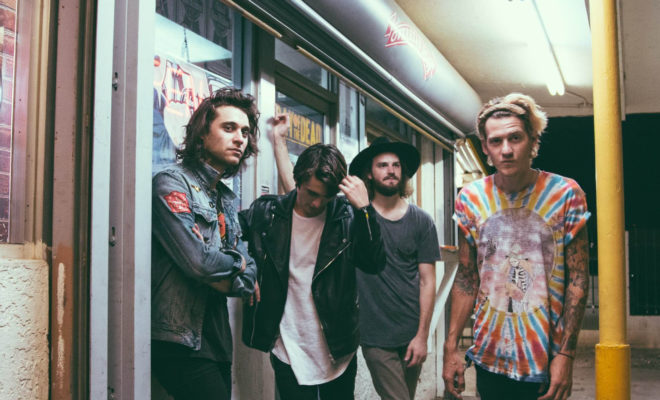 I recently caught Beach Weather while attending The Maine: Presents American Candy show at the Troubadour in Los Angeles, CA. I haven’t heard much about this band, as they recently just starting touring with The Maine on their North American Free For All Tour. I instantly fell in love with their energetic and infectious sound and they put on such a wonderful live performance. The band consists of Nick Santino, lead vocals and guitar, Reeve Powers, bass,  Austin Scates, drums, and Ian Holubiak, lead guitar.

Nick Santino is most well-known for fronting alternative band A Rocket to the Moon and for his self-titled projects over the past 2 years. Beach Weather recently formed from management 8123, the same label as The Maine  and just released their EP What A Drag. The EP consists of five tracks “Wolf,” “New Skin,” “Bad Seed,” “Swoon,” and “Rebel Sun.” The EP was produced by Sean Silverman and is the band’s debut release.

The indie-pop band’s EP reminds me of summer when you just want to lay by the ocean and relax. The tracks are incredibly upbeat and catchy and will instantly be stuck in your head for days on repeat. It’s a classic rock sound with a unique twist and is a perfect blend of guitar riffs with poppy beats. Nick Santino shows off his versatile voice and style, proving he can write anything from alternative folk to synth filled electro to rock. If you like the 1975 or The Maine then you will definitely fall in love with new band. This is a can’t miss EP and I encourage everyone to check them out!

Check out their music here: