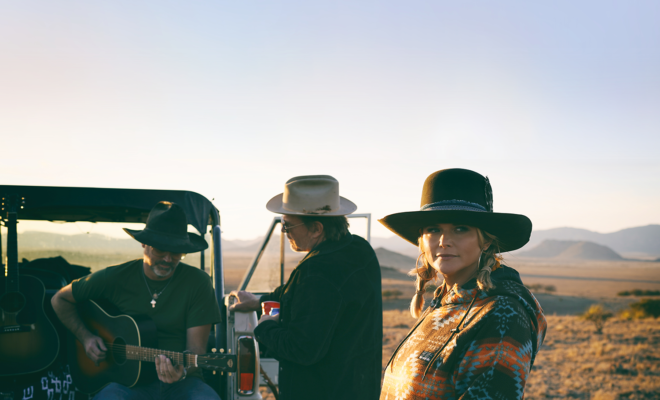 The Story Behind: ‘In His Arms’ By Miranda Lambert, Jack Ingram, and Jon Randall

Miranda Lambert, Jon Randall, and Jack Ingram released “In His Arms,” the first single off of their upcoming record, The Marfa Tapes. Discover the story and inspiration behind the song’s creation.

The Story Behind ‘In His Arms’

“Writing with Jack and John in Marfa is just this – it’s almost like surreal place, like it’s not real,” Lambert said in a press release. “The world melts away. And writing ‘In His Arms’ was one of my favorite writing sessions with them. The sun was going down and the wind was blowing and there were cows mooing in the background and we were just talking about, you know, men and how laugh and love turn out. And ‘In His Arms’ just kind of fell out of the sky.”

“Every song on The Marfa Tapes is written by the three of us over the last six years,” she added of their upcoming record. “We’ve been going out there to sort of disappear from the world and create this music. And out in West Texas, it just kind of feels like the songs fall out of the sky and it’s just a beautiful place, you know, and a long history of friendship between the three of us and so every song on The Marfa Tapes is written by all three and we kind of divide up who sang what and sat around a fire and sang it through a microphone. And that’s The Marfa Tapes.”

The Town of Marfa

Finally, what’s the small town of Marfa all about? “I’ll never forget pulling into Marfa that first night at 4am,” Lambert said. “The stars were like nothing I’d ever seen before. Just this endless blanket hanging so low you could reach up and touch them. I immediately understood why this place was so special.”

“There’s no TV, no radio, nothing to do out there but pour a cocktail, sit around the campfire, and talk,” Randall added. “Eventually, that just inevitably leads to songs. There’s no pressure to write, but most of the time, the three of us can’t seem to help ourselves.”

“There’s something singular that happens in that moment of collaboration and creation, something you can never really recreate in the studio,” Ingram continued. “Our hope with this album was to share a little bit of that magic with people.”