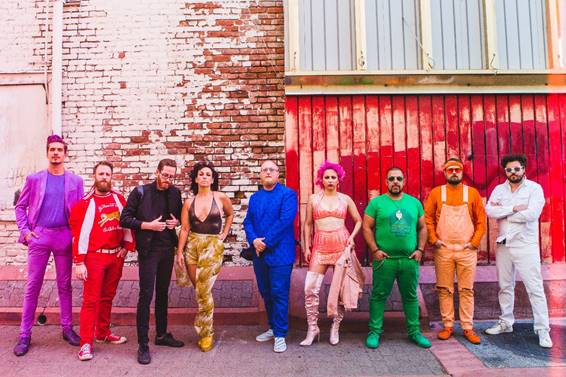 Congrats on the new album, how long has this been in the works for?

Thank you! We’ve been working on this one for a couple years. Some of it really got started with the demo process immediately after we released our last album, Digitonium. That album had 24 tracks, and this one has 9. So we really spent a ton of time narrowing down what we wanted to represent our sound this time around. We recorded a ton of material over those couple years, but the 9 tracks we selected felt like the best and most cohesive album.

For new listeners, what song should they listen to first to get an idea of your sound?

Hmm. Well, each track has its’ own identity. I think “Make You Famous” represents our more raucous and wild side, which is really the style that we started out with as a band. So that’s a good one to check out. If you have time though, I think the full record plays through quite nicely and doesn’t feel long. As mentioned about trimming it down, we kept it short, sweet and designed to feel like one listening experience that spans all the styles we have in our arsenal.

Was there a process behind the track order?

YES! I figured out that with 9 songs – there are 362,880 possible song orders. I promise, it’s true. So that kept me busy for a while. I knew certain things needed to be in certain places though. I definitely wanted “Life in the City” first, and definitely wanted “Fight the Fire” last. So that knocked it down to only 5,040 possibilities. Piece of cake! Figured it out over the course of a couple months, and managed to keep my sanity most of the time. I hope at least a few people listen to it in order to warrant the time spent on that process!

How do you go about choosing your collaborators whether that be co-writers or producers, etc.?

It tends to happen really organically. Within the band songs start as demos created by one or two of us. From there I usually take them and write over them. But this time around I’d send the demos around to different band members to see if they had any fresh, exciting ideas if I was starting to feel stale on something. It yielded some really great results, most notably with “If Ever Fall Asleep” which Josh wrote most of over my original demo. So it was really just an attempt to mix things up which totally worked out.

In another case, our good friend and Nashville musician, Rob O’Block send some demos my way, which we co-wrote on and became the creation of the first and last song on the record. That was the first real outside collaboration that resulted in Turkuaz songs for us. So that just came together serendipitously.

Working with Jerry Harrison of Talking Heads on “If I Ever Fall Asleep” was a more intentional chase. Josh and I wrote the song very much with the style of Talking Heads in mind, and it seemed appropriate. Our management reached out to him, and low and behold – he was game for it!

Your Life In The City video was stunning, how did the concept come about?

Rob who co-wrote the song with me had actually been in touch with an animator from Finland about working on a video in the past. When the song started to come together, it just seemed like the absolute perfect opportunity to have an animated video for Turkuaz. So the animation commenced and was completed over the course of a year or so while the album was being finished. The timing worked out phenomenally and we’re thrilled with the animated video! Finally we get to be video game characters. Maybe soon we’ll actually make a Turkuaz video game. That would be next level.

What do you want fans to walk away from your show thinking or feeling?

We want people coming to our shows to celebrate life, and love of music. Even through some darker themes we explore on this album, the music still feels positive and is meant to shed an optimistic light on a turbulent and sometimes scary world. We want our shows to highlight that optimism and leave people feeling invigorated and excited about life.

You’ve been a band for seven years now, is there a secret to success to get along with each other?

We really are like a family. I think the biggest thing is picking people that you like to work with and to be with in the first place. And from there, just know that you have the same goals and work together as best you can to try and achieve them. It’s important to know that issues do arise, conflict does occur, and that part is inevitable. It’s the way you react to it that makes or breaks you.

← Previous Story The 1975 “A Brief Inquiry Into Online Relationships” Track By Track Album Review
Next Story → Exclusive: Meet The Hots