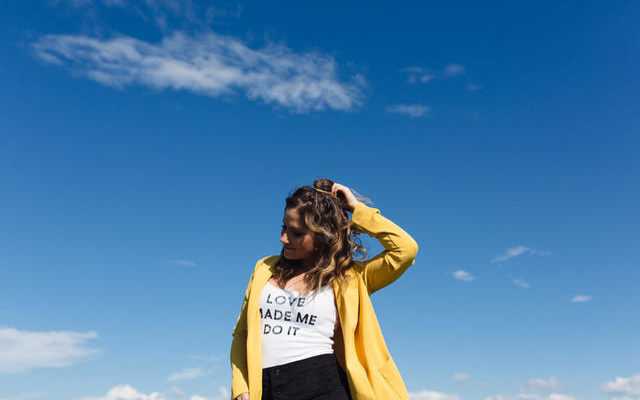 Exclusive: Elise Hayes on her new single “Giving Up”

Nashville pop artist Elise Hayes has a brand new track entitled “Giving Up”. The empowering single features Hayes glistening vocals, electro pop soundscapes and infectious melodies. “Giving Up” acts as a reminder to everyone who has ever been broken up with, that you’re worth so much more and sometimes someone leaving you is the greatest gift, even if it’s hard to see it at the time.

What is the story behind your single “Giving Up”?
I wrote “Giving Up” after a few dear friends went through bad breakups. Watching someone you care about go through heartbreak is so awful — you don’t want them to question themselves, but of course you do when a relationship ends. I honestly just wanted to share something that would make them feel empowered and light about the experience — and remind them that they got their whole future back after these guys let them go.

Can we expect an EP or more singles to be released in the near future?
Yes! Lots of new music coming. I’m still figuring out how I want to package it, but it’s coming!

💙💛 i’m water falling free, put it on repeat, i feel like myself again 💛💙 what’s your favorite lyric from #givingup ?! p/c @alexbergerphotography

When was that eureka moment when you realized music was your calling?
It sounds a bit typical, but I really can’t remember a time that I didn’t want to be in music. I started singing really early, and music just became the thing that I wrapped myself around. It was what I did for fun, what I turned to when I was going through stuff, it really has been the center of my life since I can recall.

Your songs have been featured on shows like “Grey’s Anatomy” and “The Bold Type”. Do you have a dream show for your music to appear on?
Oooo, well, I’ll be honest, I REALLY wanted a song on “Pretty Little Liars” a few years ago — ha! Now, there are so many great shows that I’m a fan of that would be so amazing — if I landed a song on “Big Little Lies,” “This Is Us” or “A Million Little Things” I would be VERY pumped 🙂

Is there a typical structure you follow when songwriting?
It really does vary — but I usually start with a melody..I am SUCH a melody nerd. I try to get the melodic landscape down in my head, and then will start writing lyrics…I feel like the vibe of a song can totally change your intention for the lyric..so I try to let it unfold naturally. There are times that I get halfway done with a song, and then just can feel that the lyric is not matching the feeling of the melody and track — so I will totally change it, ha!

Who would be some of your dream collaborators?
My dream producers to work with would be Ryan Tedder and/or Greg Kurstin. I would die to write a song or sing with John Legend or Sara Bareilles. I mean, as I am writing these, there are just so many incredibly talented people that I would love to learn from…but those are a few that pop out right away!

You’ve also been a backup singer. What has that taught you about the music business?
Yes! I think that it was such an invaluable opportunity to get to experience the industry through that lens before I did with my own music. Most importantly, I think it took me out of Nashville and made me realize that FANS love music and they are what we, as artists, need to focus on. It’s easy to feel lost in LA, Nashville, NYC, when you’re trying to get ahead and there are so many people in the industry that you’re constantly trying to impress so that they’ll help you. I think touring the country and seeing that, really at it’s core, the music industry is fueled by music lovers — made me feel like my songs mattered again and like I needed to be passionate about getting music out to people who love it and feel it.

What are your favorite hotspots in Nashville?
I’m really biased towards places on the east side of Nashville because that’s where I live. It’s so artsy and unique. My favorite restaurant is this spot called The Treehouse – it’s just SO delicious and creative. I love to get cocktails and snacks at The Fox, and if you need a late night burger — Dino’s is the spot to go to! For live music, I actually love this place that recently opened called Analog in midtown. It’s gorgeous and sounds so amazing. I’m also a huge fan of The Basement, The Bluebird Cafe, and I have to shout out The Listening Room because I have cut my teeth there and I love everybody there so much. Clearly, I love my city 🙂