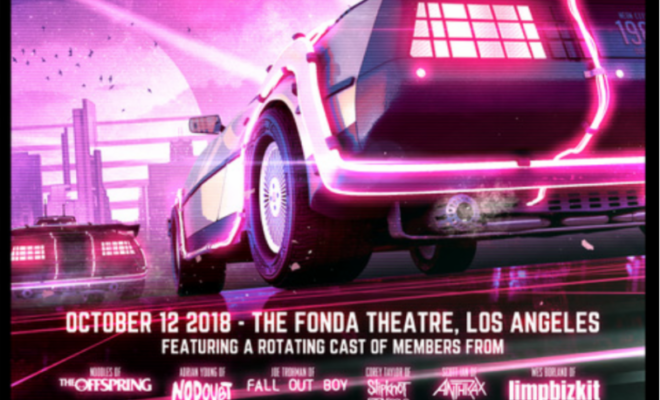 Charity Bomb is proud to announce Strange 80s 2, the second annual benefit concert set to take place on Friday, October 12th at the Fonda Theatre. In collaboration with Finn Wolfhard of “Stranger Things,” Strange 80s 2 will feature performances by a rotating cast of rock stars & celebrities covering the timeless anthems of the 80s! Tickets for Strange 80s 2 will go on sale to the public on Friday, June 8th at 10am PT, with VIP tickets being sold at a later date via CrowdRise. All proceeds will go to 320 Changes Direction, serving those who suffer from mental health, depression and addiction issues.
Performers include members of: No Doubt, Fall Out Boy, Slipknot, Sum41, Limp Bizkit, Bowling For Soup, *NSYNC, Velvet Revolver, OK Go, Sugarcult, Filter, Steel Panther, and The Regrettes, with additional performers to be announced over the next few weeks!
In addition to a full concert, Strange 80s 2 will feature a video arcade and live auction offering exclusive, big-ticket items and experiences. Plus, 150 lucky winners will continue the festivities with a rooftop after-party!
Charity Bomb’s mission is to be a force multiplier for other charities and/or organizations that focus on fundraising for musicians and artists in need. They take action by producing live entertainment events on their behalf, primarily in support of mental health, addiction and others issues that are prevalent in the artist community.
Strange 80s 2 is sponsored by Plex, Shure, and Threadmasters. For more information, please visit:  https://www.charitybomb.org/.
Related Items
Jacklyn